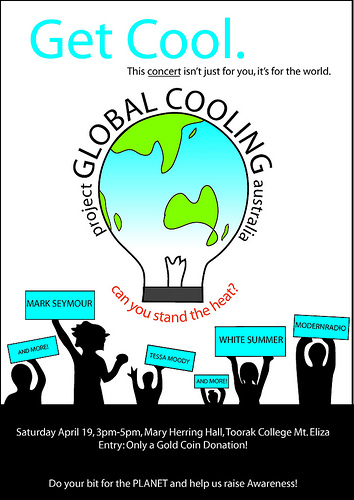 Sometimes it just takes the seed of an idea to inspire others.

Last night I was checking in on Twitter, feeling a little discouraged, and fellow librarian Jenny Luca just happened to tweet that her students’ live Project Global Cooling concert was just starting their broadcast from Australia. This was a concert they organized for free, donated their time to on a weekend, and broadcast around the world for free via Ustream.

If you’re not familiar, Project Global Cooling was the seed of an idea sown last summer by Clay Burell–an attempt to interest students in hosting world-wide concerts to, as Clay wrote, “implant a consciousness of climate change” around the world.

And now, last night, I was watching the fruits of that seed–students who not only inspired their own school, but inspired artists to appear for free, and even received a letter from a government official in Australia honoring their efforts. And Clay’s site lists other efforts going on around the world in the next week or two.

Sometimes we cast seeds out into the world-wide garden and don’t know what will come of them, or if anything ever does. But seeing the work these students around the world are doing to participate in something larger than themselves makes me believe that it is important for all of us to keep casting those seeds of the idea that we can each of us, no matter our age, make a difference.

Thanks Clay and Jenny for sharing your efforts.