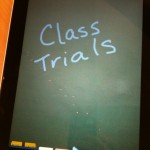 Our campus has been studying the use of iPads in both library and classroom settings this fall.

The latest part of our iPad pilot concerned using the iPad in classroom settings.  We have a set of five iPads for classroom use, so it really requires thought on the teacher’s part in thinking about how the tool fits into their curriculum and how to make it work from a practical level.

One teacher found the use of pathfinders successful.   Since the iPad allows you to set any webpage as an “app” of sorts on the first screen, she created a set of Physics sites that related to her lesson.  Some were apps and some were websites.  Then she created a pathfinder of guided questions relating to the content she wanted them to know, which these apps and websites could assist students in understanding.

On another assignment, she had students working in groups on a Physics lesson, part of which included watching a YouTube video.  Rather than show the Youtube video to the entire class at once, even if their group wasn’t ready for it, she had two iPads and simply handed the group the iPad when their group was ready.  They could pause the video themselves or replay it until they understood the concept, and weren’t dependent on her “showing it” to the whole class.  Then it could be passed to the next group whenever they were at a point to view the video.   Consequently it added a lot more flexibility and customization to the group’s work, and the iPad is so portable that it was easy to pass it from group to group.

She commented on the high level of student engagement with the assignments–because they had a tool that allowed them to move at their own pace, but wasn’t as cumbersome as a laptop and could be more easily shared, students were very engaged.

Our Environmental Science class is taking the iPads on a field trip this week to a bird sanctuary, where they will be using both the free iBird app as well as the Audubon bird app to identify birds.  From the Audubon app, they can also(once they are in range of wireless) report their bird sightings online with the touch of a button.  (The full Audubon app($40) includes mammals, birds, etc., and includes animal photos, sounds, sightings, etc.)

Other classes who have used the iPad include our Reading class, a couple of special education classes, and our Chemistry class who used the Elements app(also a paid app).

Our reading class found the touchscreen books helpful with eye-hand coordination issues, and because of the font enlarging options.

One question that interests me about this pilot is this–once the excitement about using the iPad wears off,  will the engagement of using it linger?  I think it will because when I watch students with it, I clearly notice a difference from their laptop use  in terms of sharing;  when students work on our desktop computers or in our laptop lab, they tend to work on their own, occasionally sharing with another person, but when using the iPad, the sharing increases a great deal, and it’s not uncommon to see several heads bent over an iPad, or two students with an earbud in each ear (just as we see with their iPods and nanos).   When we start to think of classrooms as more collaborative environments, a device that is easily shared can support that kind of collaboration.

Next post I’ll share the results of our pilot thus far along with teacher and student comments, but my favorite comment so far was from a student:

“Dude, if your parents bought you an iPad, you’d be so happy you’d cry!”

3 thoughts on “Collaborating with iPads in the classroom”