Yesterday was one of those perfect days at a conference, where the confluence of the setting, the people, and the sessions all come together in symphony, which makes me already feel nostalgic that SXSW Interactive is over.

Ever since I designed our library, I’ve developed a fascination for how spaces are created.  At SXSWi, the conference hall and the conference’s lounges, which are scattered about the building on various floors, were inspiring for anyone interested in design and occasional spaces. My favorite–the Beacon Lounge, which was a “lounge with a conscience.” Mainly intended as a gathering spot for nonprofit attendees, it was outfitted with comfy couches, artwork on the walls, soft music and occasional food for attendees. These sorts of lounges, each unique in design and theme, were scattered throughout the convention center. Wouldn’t it be great for students to have these sorts of spaces in our schools or our libraries?

The other space that was unexpected was the Guardian UK’s tea room, plunked down in the midst of the exhibit hall floor, complete with china tea mugs, free tea and English biscuits, milk and sugar, and little round tables with flowers. It created a “location” in the convention center, as did many of the other international spaces on the exhibit floor, like the Ireland space–again, making me wonder how schools could replicate these spaces. (I have been waxing nostalgic all morning for the tea in the Guardian’s cafe).

From the sessions I attended on archiving and libraries, which was fascinating when one thinks of all the artifacts that we potentially should be archiving or digitizing, to the session on making books digitally interactive, to the sessions on education and technology(one with Dennis Littkey, Jon Kolko, and Steven Tomlinson(Acton) and Building School 2.0 with Chris Lehmann), to a fascinating session by the authors of Gamestorming about changing meeting dynamics to encourage innovation. (a book I would definitely recommend reading) 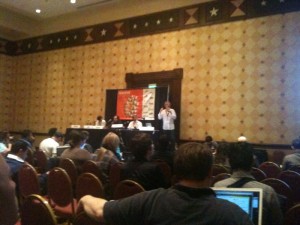 Mixed in with that were sessions with technology companies debating whether and how tech can “do good” and sessions like the SXSW Accelerator. The Accelerator sessions are ones where a set of upcoming companies, chosen as finalists, have two minutes to present their business plan, and then are questioned for ten minutes by a panel of judges from such companies as IBM and Pandora. Fascinating model for student presentations, and intense–but it was also fascinating to hear some of their product ideas, as well.

In general, the panel presentations were my favorite, because the panels spoke for a very short time, and the rest of the time was opened up to the mic in the room for questioning, so it led to a lot of interesting back and forth. In fact, most of the sessions were organized with a mic in the room and the “question-asking” time was formalized as a part of the conference process–something I think would be a great addition to any conference.

As an educator and librarian as well, it was also fascinating seeing both so many web 2.0 companies in the exhibit hall who don’t attend our conferences typically (booths from Animoto, Mapquest, Google, and others), but also hearing presentations by the business side–trying to “incentivize” user activities on websites, developing new tools, talking about the tools we all use every day from a business vantage point.

The other thing about the conference that was so interesting was the confluence of interests there–educators next to entrepreneurs, next to librarians, next to software programmers, next to nonprofits, next to social media managers, next to university technologists, next to authors and visionaries. Just a fascinating mashup of people and even though I was on the “fringes” of all of it, also a lovely sense of how everyone there was welcoming and there for the conversations.

So I leave the experience having made new contacts, and seeing how this type of conference could “seed” ideas. What a powerful combination a conference like this could be bringing in more education strands to interface with the technology/innovation strands.

I’ll be unpacking some of the learning in more posts, but overall, SXSWi was