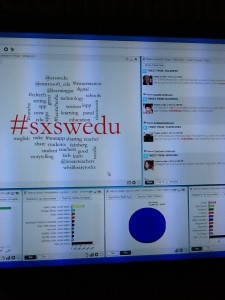 For those of us both trying to understand how the use of social media in classrooms/libraries impacts student learning, or trying to convince our IT departments or administrators that there is value to students using social media, this SXSW Edu panel presentation “Social Media Research and Practice in Higher Ed” provided a lot of meat to chew on.

Whether the tools were being used for classroom learning; after hours support for students, or publicity for the university, the results of their findings speak a lot to the K12 environment.

The first data presented regarded student involvement in campus activities as correlated with their use of Facebook.  The research found that increased time on Facebook was predictive of higher levels of involvement in campus activities; similarly more commenting on FB also correlated with higher levels of involvement on campus.   However, students who engaged in more gaming on FB were indicative of those less likely to participate in school activities.  (I have to wonder if these students gaming more are those who perhaps don’t feel as connected to an institution in general?)  How can schools use these findings to engage students in more campus activities, I wonder?  If indeed Facebook is a route to student engagement, then why aren’t schools leveraging that tool?  And if students who are gaming more on Facebook aren’t as involved in school activities, can we use gaming features of Facebook to get them more interested, or use elements of Game Design in our campus FB posts to engage them more.     (And if your campus has concerns w/ FB, a sidenote:  I saw a startup Hoot.Me which creates a platform for schools to use FB without some of the downsides–worth looking into).

A second study correlating the use of Facebook and GPA was also illuminating.   Rey Junco’s study found that increased time of Facebook or posting frequent status updates was predictive of lower GPAs, but that lurking or sharing links was correlated with higher GPAs.

A third study regarding Twitter use in the classroom also led to some not so surprising but helpful insights.  Junco’s study looked at students using Twitter in the classroom versus the control group which used Ning.  The students using Twitter had significantly increased engagement and significantly higher GPAs.  When looking at college student retention, students using Twitter in classroom were 17% more likely to stay than students who were not.    Heilberger spoke about student retention as well, and the many factors that go into that.  He pointed out that many studies of retention focus on the FTF things universities can do, but that the college clientele is shifting, and the types of ways we can engage students as an institution are different.  The use of Twitter by students in and of itself wasn’t predictive, but if Twitter was used in substantive ways in the classroom for assignments, exchange of ideas, student-teacher chats, hashtags for courses, etc., students were more engaged, and that engagement seems that it would encourage them to feel more individually valued in a college class.  Using Twitter as just a backchannel did not necessarily yield that positive result.

When asked by an audience member about using other software tools to attract student engagement, but Liz Gross and Ed Cabellon commented that research shows that students prefer using Facebook, rather than another tool, since they already spend about 1 hour and 40 mins daily on FB on average. (Not sure if that number is from their studies or other ones).

Cabellon discussed the use of Facebook and Twitter in drawing students to campus events, and their campus found that more TYPES of students were drawn to their events than if they had promoted them via normal means.  It was attracting the outliers who weren’t necessarily in student government, etc. which is important in student engagement and retention.  He wondered if high schools should be doing more to help students use FB educationally and pointed out the cost effectiveness in lean budget times of using FREE tools like Twitter and Facebook.

All of their work illustrates why public schools should increasingly take a hard look at how these tools could impact the engagement of their students, the attendance at school events, and the sense of belonging that helps student retention.   Rather than flee from the tools in fear (the type of fear-mongering often flung out at administrative conferences regarding social networking), perhaps we should be doing research studies ourselves comparing the impacts of these tools on student learning, student engagement, and student attendance at events.  I think there’s great potential for action research on Twitter and Facebook use in schools in this regard.

Junco’s papers and research articles are posted full text on http://blog.reyjunco.com/publications.  Since this session was a panel, the information shared was only snapshots, so I’m looking forward to digging into some of the research in more detail.