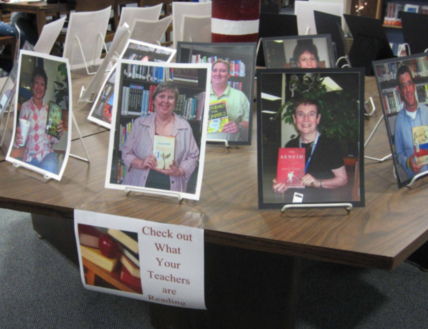 This week is National Library Week and to celebrate, we’ve invited all staff on our campus to pose for a photo with their favorite book, which we’re displaying in the library.

And as our “library 2.0” feature, we’re setting up an empty table for students and asking them to “create” a display by placing their favorite book on the table and then we’ll take their photos as well as making space for them to post on our student blog.

I picked out my favorites too.  (As you can see, ms-footes-favorite-books.doc, I ended up picking a little stack of books, which was sort of cheating but I figure as the librarian, I’m allowed!)  So, here’s some of my favs:

Little Women –maybe an embarrassing choice, but I have to be honest and say this book influenced me a great deal

Farewell to Arms –my high school senior English teacher, Bill Warren, and my journalism teacher, Mike Nowland,  gave me Hemingway to read, and I think that  caused me to embark on a literary journey because they took my interest in literature seriously.

Desert Solitaire –Edward Abbey blends a reverence for the natural world with a curmudgeonly irreverance for our attempts to destroy our planet.  Beautifully written book.

Blue Highways –William Least Heat Moon captured the roadtrip wanderings of my childhood driving vacations and reflects the desire I always have to explore the “blue highways.”

The Day I became an Autodidact — Kendall Hailey’s account of how she taught embarked on teaching herself the last two years of high school with a literary reading list captured my imagination about the power of literature.

Slaughterhouse Five and Palm Sunday –Kurt Vonnegut’s wry, clever writing and his deep and fiery kindness for the human race has always charmed me.   So in memoriam, I’m selecting the two titles of his that I liked the most.

Whole New Mind –I wish Daniel Pink’s book had been written 20 years ago–it would have made me a better educator and parent.

3 thoughts on “Books that changed your life”