I’m reflecting on Educon 2.0 this morning and the most powerful parts of it for me.

One of the most powerful aspects for me was online community turned real community -that in 140 characters on Twitter , bit by bit, you create connections with other educators. And when you meet them, it’s like you are just picking up the conversation where you left off, not like meeting them for the first time.

So, that’s what I’m hoping we do after Educon—pick up the conversations where we left off. I worry that when we leave the rarified environment of SLA and enter our own schools, that we’ll become discouraged. Once you see what things can be like, it’s difficult to go back. 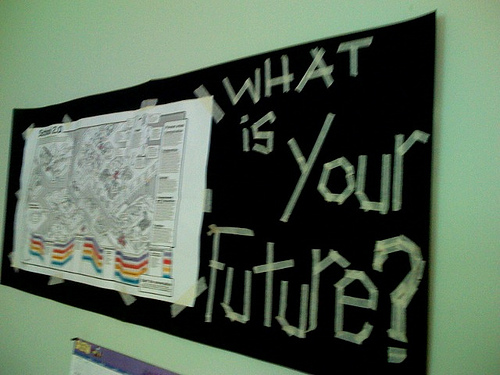 So, what was different about SLA and what did I learn at Educon?

–A mission–everyone knows what the mission is and what they are there for.  Every student you ask, every teacher, clearly knows that mission.   And everyone does what is needed to get it done.   One quiet little moment that really moved me was when I opened the door to the stairwell, and a student was there with a broom, sweeping up a little area of the floor, in a place no one would even really have noticed–because he cared about the mission of their school and it belonged to him.

–Constructivist learning –Students who are so incredibly committed to their school not because of extracurriculars or sports, but because they know they are learning and they’ve made a commitment to their own learning.   Students who are making meaning by discovering knowledge, discussing things in class–students who are expected to bring themselves to the classroom.  I saw an incredible presentation led by a group of students on their collaborative playwriting process, and the students were so excited and committed as they talked about what brought them to spend their “extra” time working on this project.   Like Konrad Glogowski spoke about in his presentation, let’s stand like Caravaggio on the side of the painting and shine a light for our students while they learn.

–The people–When Al Bichner, CIO of Philadelphia Schools spoke at the opening session, he said that he knew he had a “first round draft pick” in Chris Lehmann.   The staff is incredible.  The students want to be there.  The energy of the people in the building make a difference. 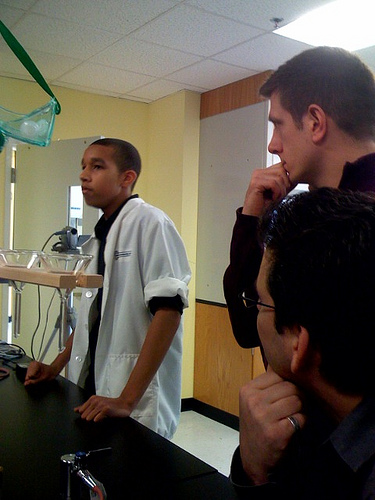 –The power of collegiality—This permeates the school.  Students feel empowered to express their opinions , and teachers feel the freedom to let their students learn through discussion and exploration of ideas.  You see a principal and teachers who are colleagues in the real sense of the word, working side by side for a truly shared mission. As one teacher put it today, “What’s different at SLA is that we all want each other to bring our best.”   Everyone is in it together.

— Community. There’s a sense of everyone looking after everyone else. Community based around everyone on campus as a learner. Not just students but teachers. I saw students leading workshops, students from both SLA and from elsewhere. And by having students show up, all of us learned.

For example, at the end of my own workshop, we reflected twitter-style(briefly) on our experiences at Educon. Several of the students present commented that what they learned was that  teachers really are passionate about learning, and that there are teachers who really care. And we as teachers saw in action how powerful adding student voice to the mix is.    How sad it is that somehow we aren’t conveying that to our students in every school, that we really care about learning, and that their voices are so valuable to us.   That is something we can change.

I’ve been thinking a lot about an article I read in American Libraries recently, which pointed out that libraries can get overly focused on the “commodity” of books rather than the customer. I see this as an issue for secondary schools.   We focus on the commodity of content over the learner themselves sometimes.   We get so consumed by content that we don’t see the “whole” school or work together.

Two students over the course of the weekend told groups of us that their best learning experience had been elementary school, because they learned by experimenting, by doing, by playing.  One of the most innovative ideas I heard was from Arthus Erea, a high school student from Vermont, who pointed out that he felt students should be asked to make a learning plan with each teacher reflecting what the student would like to learn from a course. We dialogued in Arthus’ session about the fact that we indoctrinate students from an early age and so they sit there passively expecting to be told what to learn, because we don’t ask them to be partners in defining their own learning.   When Arthus shared the example of receiving his syllabus in the mail, “telling him” what he was going to learn–my eyes were suddenly opened.  Where is the invitation in that for our students?   Are we inviting them in to our classrooms?

–Conversations.  As I mentioned yesterday, the power of conversation was everywhere at Educon, and I suspect everywhere at SLA.  It is a school that talks about ideas.  And the conference was the same way.  The conversations were happening everywhere in every corner, stairwell, hallway, and conference room.   Sylvia Martinez pointed out in the panel discussion on Sunday that the system of schools in our country wasn’t really so big–100,000 schools isn’t really that many to change.     We just need to keep spreading the conversations.

5 thoughts on “Picking up the conversation where we left off”