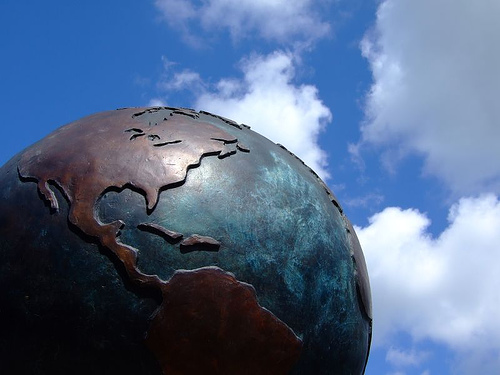 What happens when what is going on in your classroom can be shared around the world?

Today, by sharing his students at Arapahoe High School in Colorado, Karl Fisch gave us just that opportunity–to peer into a classroom and see networked, scaffolded, engaged students at their best.

For weeks, students in several English classes at Arapahoe have been reading Daniel Pink’s book, Whole New Mind, and have been discussing it via live-blogging sessions, using an inner/outer circle discussion method.   (The inner circle discusses, the outer circle blogs their reflections on the discussion).  In the culminating event today, the students got to videoconference via Skype with the author, Daniel Pink, directly.

I was able to participate in one of the live blog discussions a few weeks ago, and it was fascinating to see as some of the students created meaning for themselves as we talked on the blog about the book.   They helped one another find understanding, work out details they didn’t understand, and it deepened my own understanding of the chapter as well.

Today those of us watching the videoconference via Ustream  with the students could see the fruition of this method in the classroom.  The students interviewing Daniel Pink were ninth graders, yet were having a detailed and in depth discussion with him about the book.   You could see that after having discussed it so much in the live blogging and in their classrooms, that they felt ownership of it.  And it was also clear that they have been in an inquiry-based, student-centered classroom because they felt really empowered to ask questions and even to challenge some of the things that Daniel Pink said.

Meanwhile, as viewers, we were able to participate with students in the room who were liveblogging the event, via CoverItLive, and have discussions with them about their reactions to the conversation in the room.   Again, students were asking questions, making comments, probing, and clearly were entirely engaged in what was going on.  The chat was flying by almost faster than we could read.

At own my campus, a group of us were gathered around one “unfiltered” computer in the library(since Ustream is blocked on our campus) and watching the video conference mesmerized.  (I wish I had thought to take a picture of that!) And every teacher who walked into the library came over and watched for awhile, then asked, When can I do that?   A student aide sat and watched with us and responded to the discussion here and there as well, and watched the entire time.

Karl Fisch, Anne Smith, Maura Moritz and the other teachers involved didn’t just create a unique and powerful learning experience for their students.  They allowed educators all over the world to ask their colleagues, “When can we do that?”   They set an example for administrators, IT departments, teachers, librarians, and students all over the world.

Since the event ended, I’ve seen countless comments on twitter or via emails on our own campus from teachers eager to try something similar, eager to engage their students this way, and countless comments about people who shared what Arapahoe did with their own principals, administrators and teachers.

When we share what we are doing beyond the walls of our classrooms, we are inspiring countless others to rethink their practices or to take a leap of faith.   When Karl Fisch posted their plans today, he wasn’t entirely sure all the technology pieces would cooperate, and his focus was first on his own campus.  But his generosity in sharing has created opportunities for teachers many times over.

That’s what happens when your classroom is heard ’round the world.

Thanks, Karl and all the teachers at Arapahoe for including us.

(and thanks to Daniel Pink, as well!)

3 thoughts on “The classroom heard ’round the world”