When people wonder why some of us(like myself) have been insistently tweeting, Facebooking, and blogging about NBC’s upcoming Education Nation programming–it is because I fear that the voice of many educators who do not agree with this national story of education are going to be completely squelched and that the damage done by a one-sided narrative will make our own visions of education reform even more difficult.

I am really hoping somehow that NBC has the wisdom and has done their homework enough that they don’t just sell the “soundbite” of education reform by means of “merit pay,” “charters” and “blaming unions” because the media has the power to mold public opinion so that this narrative becomes even more rooted in the psyche of our nation.

The problem is so much more complex than this narrative makes it, and what is called “reform” right now really looks much more like 20th century education, like the “back to basics” movement dressed in new clothes.

What real reform would look like to me–is the role of the internet and online social networking in making education more collaborative, in fostering classrooms that are global, in fostering community within schools both among teachers and students, in partnerships between schools and museums and universities, and in curiously investigating how schools can be more student-driven and collaborative and  more.

Gordon Korman wrote a very entertaining young adult novel, No More Dead Dogs, in which the protagonist refuses to read any more books about dogs that die in the end.   I feel like the protagonist, the ill-named Wallace Wallace.   I’m tired of hearing the same tired blame game in education and don’t want to read about the ‘dead dogs’ anymore.

I’m tired of it because the blame game just oversimplifies complicated problems by trying to scapegoat one group or another (blame the unions!  blame the teachers!  blame the government!) rather than seeking real (and new) solutions.

And the same “blame game” leads us to the same “lame” solutions over and over because we aren’t considering the complexity of the problems, so our “fixes” are simply bandaids or whips.

My worry is that Education Nation and the media will get it “wrong”, will buy unquestioningly into the current narrative and further solidify the bandaid/whip approach that has troubled education–which is why I’ve tweeted and blogged and Facebooked about it.  But I’m holding judgment and trying to be cautiously optimistic, and at least appreciate that our input has helped make the programming better or that our concerns are being listened to. 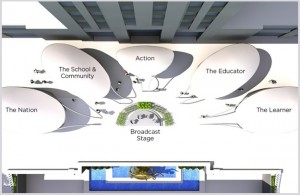 When I looked at the diagram of the Education Nation plaza online yesterday, I felt hopeful that perhaps this programming was intended to bring all of “the players” together to have conversations.  (I also noticed that ‘CEOS’ was not a section).

But again, despite this, I worry because the media in general tends to embrace and foster sensationalism and blame seems to be the name of the game these days.  And many of the leaders at this summit are those perpetuating that atmosphere of blame, and turning this into a simplistic, business driven conversation.

We are not in a one-sized fits all solutions world.   The factory approach to education ill-serves us, and the strange dichotomy here is that on the one hand, charters are being promoted to allow for varied curriculums and thematic schools and experimentation and on the other hand, regular public schools are being held strictly to the ‘factory’ model of creating a product that can be measured and tested.  We need to be examining these conflicting views of our approaches to schools and figuring out a more consistent, open minded approach, particularly in regard to the public school sector.   And again we need to stop blaming.   All of us have a place at the table and all of us deserve being listened to.

So my motto for this week–is “No more dead dogs.”   No more predictable outcomes.  No more making out teachers as whiners.  No more blaming.   How about a real, open, curious, 21st century dialogue that’s about REAL reform and REAL change?    Not just whips and bandaids.