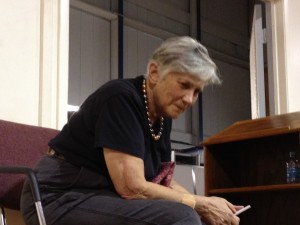 Yesterday Diane Ravitch spoke at Eastside Memorial in Austin as part of a forum sponsored by Strengthen Austin Urban Schools coalition.  (Strengthen Austin Urban Schools is an organization that works for a  transparent process from AISD for decisions made in the school district.)    Other panelists include Karen Dominguez Burke, Occupy AISD, and Dineen Majcher, Texans Advocating for Meaningful Student Accountability (TAMSA)

Ravitch spoke about the important democratizing influence of our schools on our country the last 100 years, and the important role public schools have played in issues such as integrating our communities, for example.   She called public schools an “engine for democracy.”

She had strong words for the corporatization of American schools by companies like Pearson and for profit charters.

Ravitch challenged the audience to consider the disparity between the national “our schools are failing” dialogue and looking at the NAEP scores, which have had a  steady incline for 40 years.   She points out rightfully that the greatest progress in narrowing achievement gap was in 1970’s and 1980’s–more desegregation, more economic opportunities, reduction in class size and more money for early childhood education.   I was curious about the progress in the NAEP scores, and in glancing at the reading/mathematics scores since the 70’s, it is clear that they have either held steady for the last forty years, or gone gradually up.  In fact,  at most age levels, scores were higher in the 90’s than in recent years under NCLB.   And according to the NAEP, the gaps between minority students and white students have not changed significantly since early 90, and in fact, were smallest during the mid nineties(Clinton administration).   So after 10 or 11 years of the NCLB, there has been little to no closing of the achievement gap.  Again, this brings up the question–if we are all about data based decision making, and the data seems to show that what we are doing hasn’t been very effective, then why do we keep pursuing the same policies and rhetoric?

And despite what she notes is a national dialogue about failure, math scores for students age 9 have continously gone up and shown the most improvement over the last 40 years.   So it’s very interesting to look at the National Assessment and then contrast that with  the national rhetoric regarding the decline in our students’ learning.   (Not that these scores are the only measure, but it’s a measure that is being used politically to tout advances or failures.)

We need to make an effort as parents and teachers to look at the statistics being cited, and ask our legislators and politicians to SHOW us the data they are basing their conclusions upon.   It’s so easy to just repeat the rhetoric without ever taking time to look for ourselves. (and by the way, researching assertions about data  is such an important skill to teach our students.)

So Ravitch pointed out the damage of this national rhetoric of failure–it divides communities, humiliates students (and teachers), causes administrators to be fired, students to be held back (repeating tests like the Texas STAAR test)–and all a rhetoric based on this perception that doesn’t reflect the test results in the NAEP.    As she said, “We’re the most powerful nation in the world and yet we have a chorus of voices saying that our schools are failing.”

Ravitch remarked that when anyone tells you about a miracle in education, ‘tell them to take it elsewhere.    Schooling is hard work.  NCLB made outrageous target that 100% of children proficient in math and reading;  when you have an impossible target, you will fail.  And schools that were the heart of communities have been closed–replaced by another school that has now failed–“creative destruction.”  You can’t have a learning community if you sow distrust among the community.’

She didn’t have kind words for Race to the Top which she noted is the cousin or  little brother of NCLB.  What does it mean to race to the top, she asked?  Where are we racing and what is the top and who wins and who loses?  We used to say the fundamental principle was equality of educational opportunity.  But with competition you don’t have equality?  What identifies you as being at the top?  We know who will be left behind–the same kids that will be left behind in No Child Left Behind.

She challenged the data on testing in many areas, which should prompt us to investigate it ourselves, commenting “There is not a shred of evidence that the methods we are doing are working.
She pointed out that on average, charters don’t get different scores than public schools overall.  Some of the highest performing charters don’t accept children with disabilities, low scores, ELL learners, etc.  Focus on showing schools can produce high scores overshadows serving kids.  She also had strong words for the disparity in test scores in relation to socioeconomic conditions.   “If you really wanted to raise test scores, you would reduce poverty.”

She also spoke up about vouchers in places like Milwaukee, WI. and asserts that no test score benefits have been shown.  Why do politicians keep touting vouchers?   No evidence that they provide better education or higher test scores.   I wondered about this, and found this interesting study of the Milwaukee schools, comparing voucher programs to public schools, and the report bears out her premise that studies like that one aren’t demonstrating a benefit of voucher schools, yet politicians keep touting them.  I find it hard to comprehend both this constant cry for data in education when it is clear that data is ignored constantly in the pursuit of political ends.

Ravitch expressed great concern about “for profit” virtual charters–because when profit is involved, what matters is profit, not children.  Companies are very aggressive, but what is their dropout rate at the online virtual schools?      Are their test scores and graduation rates examined?   Shouldn’t that be considered the same as it is for public schools?

She had words to say about merit pay as well.  As she pointed out, ” teachers don’t want to compete to see whose students get the highest scores because they understand that they work together as a team.  They don’t want to get a bonus at someone else’s expense.”   She reminded the audience that  Neal Armstrong was reluctant to take credit for his accomplishments–because he felt that those at NASA worked as a team–he didn’t build the capsule, he didn’t get myself into space.  As teachers our nature is to work as a team, and merit pay doesn’t acknowledge that.

On the issue of the evaluation of teachers on test scores– It never occurred to her when she was a student that her teacher should be fired for her scores.  “My scores were my responsibility.”   Results are now showing that gains for testing are much higher for high performing schools, much harder to show gains for lower socioeconomic students, ELL students or students with disabilities.  Consequently, she says, “You are rating teachers by who they teach not whether they are good teachers.”  Merit pay or test based teacher evaluations really benefit those with students in the middle, according to Ravitch, because high performing students start at a high level of performance and students in great need also show small gains, so as an evaluation system, there is inherent unfairness.  (In addition to all the other reasons evaluating teachers based on test scores isn’t a coherent strategy).

So question arises–who is behind this “false” reform movement?

Ravitch stressed “Because testing is the life-blood of all these bad ideas, we have to stop high stakes testing.   Testing is designed to diagnose if children have needs.  Tests have become a means of stigmatizing children, and they are just not that good a predictor of success.  Bill Gates is a college dropout, does it matter if he had high scores or not?  What’s matters is not what is tested, it’s their imagination, their character and their determination. Every child is different, every child is unique and each one is precious.”   She stressed how this national conversation of failure and this focus on testing treats our schools and children like they are failures–instead of using tests as diagnostic tools, we are using them to label schools and students.

Her belief in what works?  “Hope not fear.  Respect, not carrots and sticks.  Creating love of learning.  Treasuring imagination.  Having time to play.”

She closed with a rallying cry, reminding the audience that we are many and we have authority and a voice.  Ravitch encouraged audience members to blog, write letters to the editor, tweet, speak to legislators, organize events and make our voices as parents and educators heard.  As she(a fellow Texan) reminded us:  “You are Texans. Don’t let them bully you.”