Watching recent events in Ferguson and recent tweets about the immigration debate reminds me how important it is to address visual literacy with our students in the media-rich environment they live in.

The last two years I participated in couple of amazing sessions at ALA with Tasha Bergson-Michelson, Debbie Abilock and Kristin Fontichiaro, one on Slow Thinking, and one on Visual Media, which changed how I think about images I see and work with. (I wrote about it here).  They dug deep into the details behind the graph or map or chart using local information to reveal underlying presumptions or what could mislead.

I was reminded of that session when reading a recent article on presidents and executive orders.   A graph that was widely being circulated does show that despite current rhetoric, President Obama has issued far fewer executive orders than other presidents of recent times and throughout history.   Data sometimes cuts through the rhetoric more effectively, so I initially took the chart at face value as an important counter to media hype. 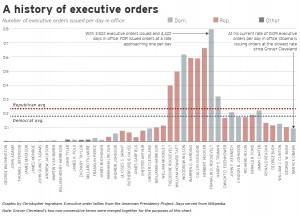 Then another article, Why Counting Executive Orders is an Awful Way to Measure Presidential Powers , came across my Twitter feed about that very graph.  It was fascinating stuff.  Digging deeper, it turns out that the chart only represents executive orders, and that presidents have many powers at hand.    In fact, several actions taken by President Obama that have caused consternation were not actually executive orders, as it turns out(so consequently wouldn’t have been reflected in that chart).  Which also means that for other presidents, many actions taken wouldn’t necessarily be represented in that chart either.

A second article elaborates on and confirms this interpretation:  “Obama’s Executive Orders:  A Reality Check,” all of which leads me back to information and visual literacy.  What Fontichiaro modeled most effectively was taking the time to talk through a graph, to layer information over it so that it is more representative of the full picture.   Even spending one class period delving deeply into a graphic like this can transform how students approach their reading.  Do we insist on a better understanding or close reading?   With our students in an Instagram, Facebook posting, CNN headline news world, but also a world of citizen journalism, these skills are real and they are important.

News Coverage and What Media can Tell Us

Which brings me to the coverage of Ferguson riots this morning.   Using the Newseum’s website, a glance at their “Today’s Front Pages” reveals interesting coverage of the events in Ferguson compared with our local newspaper.

For students we can ask–What sorts of photos appears above the fold? Is the story even featured on the front page?  What was the emphasis? The lack of an indictment? The riot?  The President’s speech?  The personal agony of the family?  Is the coverage different in different parts of the country?  What might students predict about the coverage by geographical location and are their predictions correct?  Last night, flipping through news coverage between the three cable “news” networks was also quite revealing.  Some of the differences in the coverage were more subtle than others — the language used, the location of the reporter, what was emphasized over other things.  Again, I wonder how we can help build this critical eye for our students.

I happened to visit the Newseum last year on the date of the Kennedy assassination and outside they displayed many front pages from across the nation which gave a fascinating glimpse of how the country responded to that agonizing event.  Picking any historical date that is covered in your class and using the Newseum’s site would certainly provide interesting discussions for students.  The Newseum actually tweeted a comprehensive lesson plan for engaging in this kind of discussion with students both with the news of the day or a historical event.  They also have modules like this one on the history of the Civil Rights movement from the perspective of news coverage, front pages, etc.

TwitterData has an interesting animated chart of Twitter’s reaction to the Ferguson indictment announcement.   What would it be like for students to overlay this with a map of urban areas in the U.S., or a map of  Twitter users to compare?

The Role of Educators

Sometimes perhaps we are afraid to approach controversial issues in the context of our classrooms, but they are part of the media stream our students are seeing (or not seeing, for that matter).   And if we approach it not only from the human side, but alternatively, approach it in terms of a rich lesson in visual literacy, we have really capitalized on a real world opportunity that will “stick” and be relevant far beyond their year in our classroom and help them think more critically.